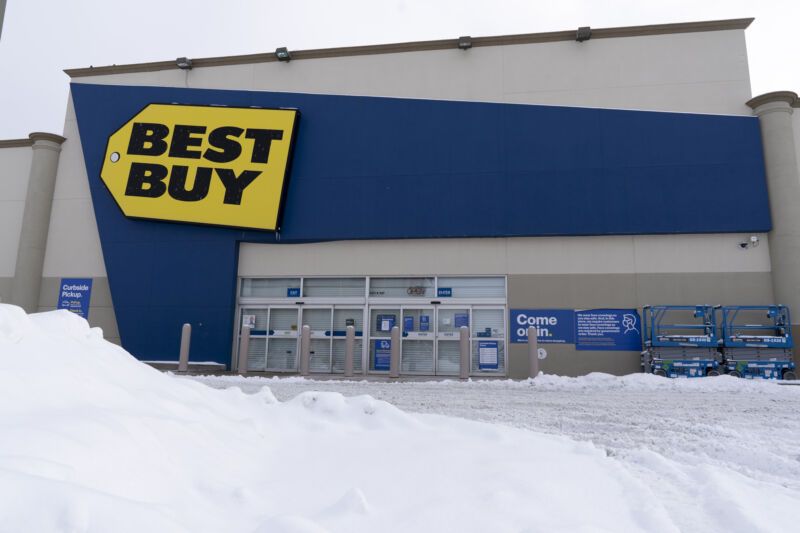 Best Buy says it has trimmed its headcount by 21,000 over the last year as the pandemic has accelerated the company’s transition to selling online. Most of those losses were due to attrition—including workers who were furloughed during the pandemic last year and then chose not to return to work. But Best Buy says that in recent weeks that it formally laid off 5,000 workers. The company now has about 102,000 workers—including employees in its retail stores and corporate headquarters.

A company will often lay off workers because it is struggling. The last year has certainly been a challenging period for some brick-and-mortar businesses. This week, for example, the electronics giant Fry’s shut down all of its stores.

But that doesn’t seem to be the situation at Best Buy, which has weathered the pandemic fairly well. In the last quarter, same-store sales at Best Buy’s brick and mortar stores were up 12 percent compared to a year earlier. Meanwhile, online sales were up an impressive 89 percent.

As a result, online sales accounted for 43 percent of total sales in Best Buy’s fourth quarter, which ends on January 31. That’s way up from 25 percent in 2019 and 22 percent in 2018. And Best Buy believes that this shift will be mostly permanent, with 40 percent of sales coming from online in the new fiscal year.

Best Buy says its recent changes are an effort to adjust to this new market reality. Traditional stores aren’t going away, but they’re becoming less important. Best Buy says that it has been closing about 20 stores per year over the last two years and expects to accelerate the process in the coming year. Best Buy has 450 stores (out of roughly 1,000) whose leases will run out in the next three years. The company says that it always rigorously evaluates a store before renewing its lease, but in the future, the company will have “higher thresholds on renewing leases.” In other words, under-performing stores will get shuttered more quickly than in the past.

Best Buy is also working to increase the flexibility of its workforce by training workers to perform a mix of face-to-face and online-oriented jobs. For example, during a slow shift, workers with appropriate training can pick up customer calls from Best Buy’s national hotlines.

Best Buy plans to reconfigure stores to devote less space to showrooms in the front of the store and more space to storage and shipping facilities in the back. Store workers will be able to spend some time helping customers face to face and some time packing online orders.

Some parts of Best Buys business are booming

This is all in the context of a generally upbeat financial picture for the company. In a call with investors on Thursday, Best Buy executives reported that the pandemic has boosted demand for several categories of products that Best Buy stocks. For example, the company has struggled to keep gaming consoles on store shelves because “there just hasn’t been enough inventory to meet demand.”

Remote workers have been spending heavily on a range of work-from-home products, from “high tech chairs to monitors to standing desks.” Best Buy says that printing products are in perpetually short supply.

Moreover, Best Buy believes the spending surge is unlikely to abate in 2021. While many workers have struggled financially during the pandemic, a lot of white-collar workers have seen their savings rise as they kept their jobs but couldn’t spend as much on restaurant meals, travel, or other luxuries. So Best Buy expects strong sales of luxury gadgets to continue well into 2021.