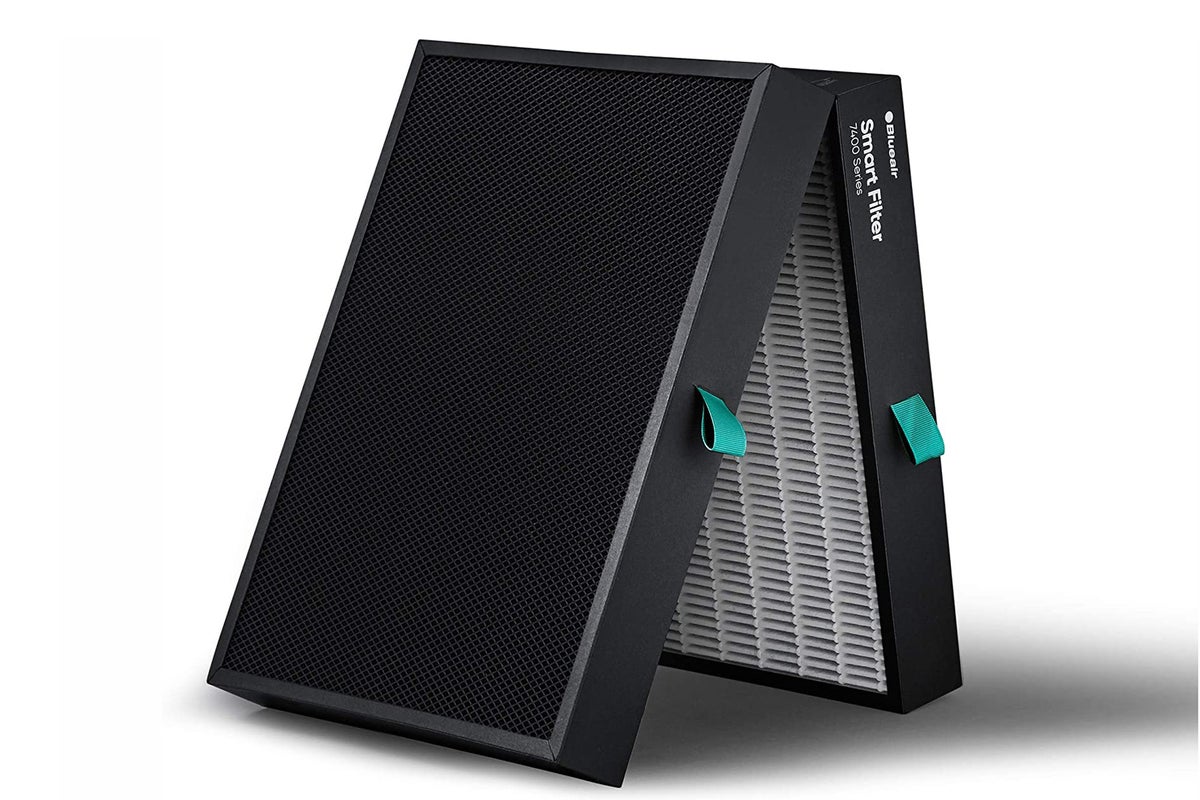 That’s not a robot extra from a Star Wars movie. It’s another smart air purifier, Blueair’s HealthProtect 7410i.

The HealthProtect 7410i is a sizeable unit, measuring more than two feet tall and weighing nearly 28 pounds. Its upright design makes it a bit awkward to move around, but two wheels on the back of the unit let you drag it like a vacuum cleaner, albeit this is a bit awkward.

Smart features aside, one of the unit’s biggest selling points is its ventilation design. While the typical high-end air purifier draws dirty air in through the bottom and ejects filtered air through the top, the HealthProtect pulls air in from the sides of the device, passes it through a unique V-shaped pair of filters, then ejects it via outlets positioned all around the device.

The so-called SpiralAir design aims to disperse air more fully throughout a room, and while I can’t accurately measure whether clean air is really getting to the corners of the room better than the competition, it does make for a different experience than a unit like the Mila or the OxyPure, both of which shoot air straight upward in a jet-like manner.

Mentioned in this article

The company says the purifier can fully clean a 418 square-foot room in 12 minutes, capturing smoke particles with a CADR (Clean Air Delivery Rate) of 270 cubic feet per minute (cfm), dust with a CADR of 275 cfm, and pollen with a CADR of 280 cfm. It also promises to capture volatile organic compounds (VOCs), bacteria, and viruses, although it hasn’t been tested for effectiveness at removing coronavirus from the air.

The HealthProtect 7410i’s single filter, which has a lifespan of six months to one year, costs about $70 to replace. An RFID chip embedded in the filter monitors its remaining useful life and reports that info to the app. Subscriptions are available for discounted pricing on replacement filters. You can also buy Blueair’s replacement filters on Amazon.

The HealthProtect’s onboard controls are minimalistic and not instantaneously intuitive, though the manual walks you through the ins and outs of setting fan speed (three are available), automatic mode, and the “GermShield” feature, which kicks in when a “germ-prone environment” is detected. A sizable LED bar offers an easy peek at your air quality, measuring particulate and gas pollutant levels separately with one of five colors ranging from blue (excellent) to red (very polluted).

You’ll get a lot more information out of the Blueair app, which tracks pollutants separately—PM1 (particulate matter measuring 1 micron), PM2.5, PM10, and VOC levels—plus temperature and humidity. Manual controls are easy to access here—including a night mode that turns off the LEDs and quiets the unit—along with a basic scheduling system.

I don’t like my purifier running at all during the night, and I found it easy to set up schedule to silence it after hours. I did encounter some bugs when trying to configure a second schedule for the daytime, as the app erroneously told me the two schedules were overlapping. A little trial and error (and deleting and recreating schedules) eventually sorted that out.

Blueair’s HealthProtect series doesn’t offer the most enticing design, looking better suited for a hospital than a home, but its impressively quiet operation is a major plus. And as with other high-end purifiers, it’s not cheap. The $600 7410i version, reviewed here, is the entry level for the line of four different models. Prices hit $840 at the top end, which gets you a higher rate of air flow and an informational LCD display. Amazon Alexa and Google Assistant support is promised, but wasn’t enabled at the time of my review.

While both the Mila and the OxyPure are marginally more capable at various functions, the HealthProtect 7410i’s ultra-quiet operation is a huge plus that might push it ahead in the queue for some users.

Note: When you purchase something after clicking links in our articles, we may earn a small commission. Read our affiliate link policy for more details.