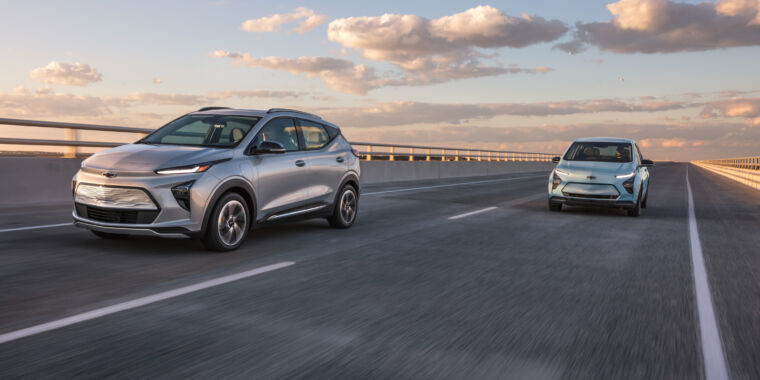 On Sunday afternoon, and after a delay of several months caused by the coronavirus pandemic, Chevrolet revealed its newly facelifted Bolt EV. On the outside, the electric hatchback has a bold, new face. On the inside, there are new displays and new front seats. Chevy has even cut the price by more than $5,000, which means the 2022 Bolt EV starts at $31,995 even though GM has sold too many EVs to qualify for the IRS 30D tax credit.

The automaker also debuted a second Bolt derivative, called the Bolt EUV. In effect, this is a stretched Bolt—it’s almost 3 inches (75mm) longer in the wheelbase, and more than 6 inches (161mm) longer overall. However, the $33,995 Bolt EUV is also ever so slightly wider and taller, growing 0.2 inches (5mm) in both dimensions. Consequently, the Bolt EV and Bolt EUV share no body panels, even though they’re recognizable as a family.

The Super Cruise hands-free highway driving assist will be an available option for the Bolt EUV, which is the first time it has appeared in a General Motors product wearing a Chevy badge. Super Cruise won’t be available as an option on the Bolt EV, however.

As is usually the case with facelifts, the work here is mostly cosmetic, and the powertrain is unchanged to the one we tested in a model year 2020 Bolt EV last April. That means the same 200hp (150kW), 266lb-ft (360Nm) permanent magnet motor driving the front wheels and the same lithium-ion battery pack still remain. (Please note: this is not the same battery chemistry that required a recall of 2017 and 2018 Bolt EVs due to the risk of fire.)

Both the Bolt EV and Bolt EUV will ship with a new dual-level charge cord with changeable plugs for 120V and 240V charging. With this cable, the Bolts’ onboard AC charger is capable of charging at up to 7.2kW; an external level-2 AC charger can top up the battery at 11kW. DC fast-charging hasn’t gotten any faster, though—it will still max out at 55kW. It is at least a standard feature on the Bolt now; until now it’s been an optional extra. Chevrolet’s technical materials list the battery capacity at 65kWh rather than the 66kWh of the 2020 Bolt EV, but range is unchanged at 259 miles (416km). The slightly bigger, heavier Bolt EUV is rated at 250 miles (402km) on a full charge.

Some might be disappointed that GM’s new Ultium batteries and Ultium Drive motors are nowhere to be seen. But reconfiguring the Bolt to use the new Ultium platform would be almost as much work—or perhaps even more—than just designing a new Bolt-sized Ultium-based car from scratch. The payoff for using this older tech is that it’s getting cheaper, as evinced by the new pricing.

People will probably be much less disappointed by the news that there are new front seats. We’ll have to sit in them before passing judgement, but given how uncomfortable the old ones could be after a few hours behind the wheel, there’s plenty of cause for optimism.