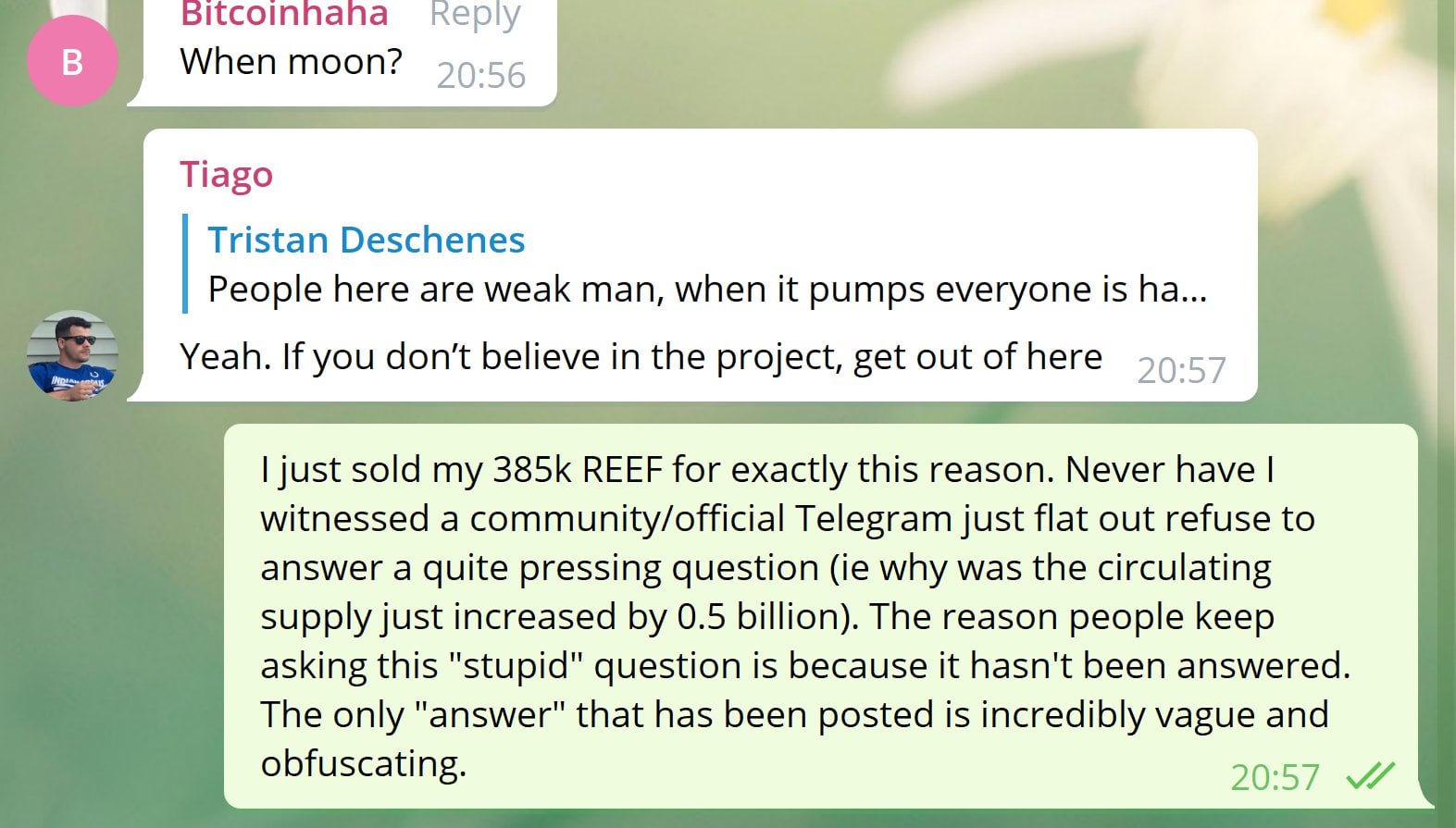 This is just a warning to the community about some shady things going on regarding REEF.

Recently there was a sudden increase of the circulating supply by 0.5 Billion, equal to 2.5% of the total supply (20 billion). Given that there is no information about this on their website, concerned investors have obviously been asking a lot of questions. My main trepidation comes from the response from REEF to these questions.

On their official Telegram, askers are being flat out ignored, insulted or banned (and the questions deleted by admins almost immediately). On Reddit, mods are banning anyone deemed to be spreading “FUD”, which is a conveniently vague term to use to rid themselves of anyone asking difficult questions.

The one supposed answer (apparently from the CEO – in Telegram) was incredibly vague an obfuscating. It read:

There are multiple things happening in the background. Reef is expanding and will become a parachain as well (not just a layer on top of other parachains). There will be a stablecoin backed by the token as well. Some things are still being finalized and we cant announce until we are ready. As you could see the supply increase was not affecting the price (also, price discussions should be in the traders group). Additionally, we are in discussions with the best VCs on this planet (again cant talk yet about anything until things are finalized)

If that isn’t a politicians answer that just insults the intelligence of his own investors then I don’t know what is.

The team – the CEO (who is listed as co-founder on LinkedIn, though there is no other co-founder to be seen) gave a talk recently about how they are expanding the team. He brings up a slideshow showing the new team members and all of the names and information on these new team members is too blurry to read (I’m not making this up unfortunately).

They recently announced that they will soon be announcing a HUGE partnership. I don’t know about you guys but making an announcement of an announcement strongly suggests their main goal is pumping the price and not reliably informing their community.

Reddit – their subreddit is full of accounts with between 25-100 karma constantly shilling the coin, claiming they’ve gone “all in” and drowning out anyone with legitimate concerns. The rest of Reddit and social media is also full of low effort shilling for REEF from accounts with virtually no posting history.

Telegram – their Telegram seems to have a few core members who insult anyone asking real questions and voicing concerns (most people are limited to one message per 15 minutes – these members are not), their mods flat out ignore most questions and give either copy/paste or incredibly vague answers at best. Recently, their site was down and one admin claimed it was because the site was being developed (obviously very rare that a site would be completely down for maintenance – particularly at this time), but then the narrative quickly changed that it was in fact cause by a DDoS attack. Anyone asking about this downtime is currently being ridiculed.

Anyway, I just sold my (quite significant) bags of REEF for the reasons outlined above. This is just meant as a word of warning to any investors/potential investors to tread carefully.

It could be that REEF is 100% legit; these red flags could be purely coincidental and it could be that the marketing team and toxic community give an inaccurate impression of the overall project, but it just seems like too much risk, especially given the number of scams in the crypto space over the years.

TL/DR REEF recently added 0.5 billion tokens to the circulating supply with no explanation and are banning anyone on Telegram asking questions about it (amongst other red flags).

EDIT: Screenshots of the kinds of questions that get deleted (the first message by me was almost immediately deleted) as well as the kinds of answers given to/by the community.

Cybersecurity experts and US lawmakers criticize Amazon for a lack of public transparency about the SolarWinds hack, which was likely launched using AWS (Wall Street Journal)