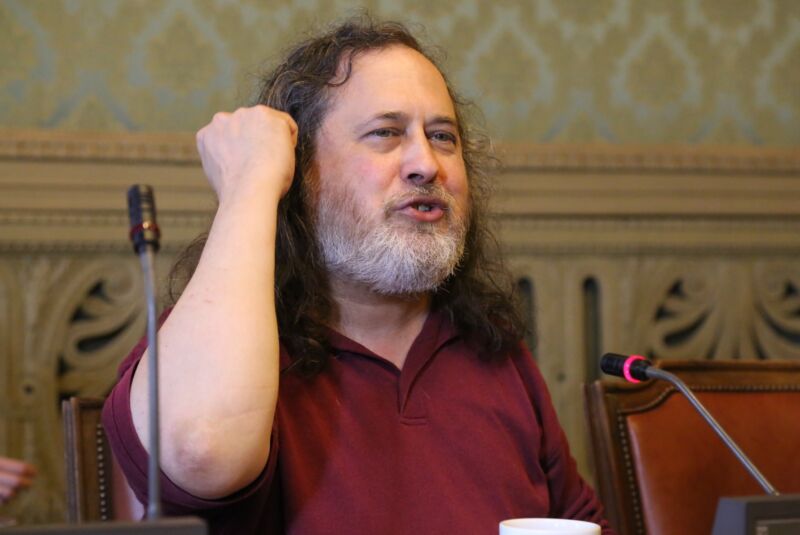 Richard Stallman has returned to the Free Software Foundation’s board of directors 18 months after his resignation over controversial comments about Jeffrey Epstein’s sex-trafficking of a minor and age-of-consent laws.

“I have an announcement to make,” Stallman said at the FSF’s LibrePlanet conference. “I’m now on the Free Software Foundation board of directors once again… Some of you will be happy at this and some might be disappointed, but who knows. In any case, that’s how it is. And I’m not planning to resign a second time.”

Stallman founded the FSF in 1985 and served as its president until September 16, 2019, when the foundation announced that Stallman had “resigned as president and from its board of directors.” While Stallman is now re-joining the board, he is not serving as president. Geoffrey Knauth holds that position.

Stallman resigned from the FSF and from his visiting scientist role at MIT after emails about the late computer scientist Marvin Minsky, who was on the MIT faculty from 1958 until his death in January 2016, were leaked.

Virginia Roberts Giuffre, a victim of Epstein at age 17, testified in a May 2016 deposition that “she was directed to have sex with Minsky when he visited Epstein’s compound in the US Virgin Islands,” The Verge wrote in 2019 when the deposition was unsealed. (Minsky’s widow, Gloria Rudisch, denied that allegation, telling the New York Post that she and her husband “were always together” when visiting Epstein.)

The leaked comments that led to Stallman’s resignation were made in an MIT CSAIL (Computer Science and Artificial Intelligence Laboratory) email thread about a planned protest against MIT’s involvement with Epstein. Stallman objected to the text of the event announcement, saying that it “does an injustice to Marvin Minsky” by saying that Minsky was “accused of assaulting one of Epstein’s victims.”

“The word ‘assaulting’ presumes that he applied force or violence, in some unspecified way, but the article [published by The Verge] itself did say no such thing. Only that they had sex,” Stallman wrote.

Stallman added that “the most plausible scenario is she presented herself to [Minsky] as entirely willing. Assuming she was being coerced by Epstein, he would have had every reason to conceal that from most of his associates.”

After one person wrote that “Giuffre was 17 at the time; this makes it rape in the Virgin Islands,” Stallman responded, “I think it is morally absurd to define ‘rape’ in a way that depends on minor details such as which country it was in or whether the victim was 18 years old or 17.”

“We know that Giuffre was being coerced into sex—by Epstein,” Stallman also wrote. “She was being harmed. But the details do affect whether, and to what extent, Minsky was responsible for that.”

On his own website, shortly before resigning from MIT and the FSF, Stallman pointed out that he never defended Epstein.

“Headlines say that I defended Epstein,” Stallman wrote. “Nothing could be further from the truth. I’ve called him a ‘serial rapist’, and said he deserved to be imprisoned. But many people now believe I defended him—and other inaccurate claims—and feel a real hurt because of what they believe I said. I’m sorry for that hurt. I wish I could have prevented the misunderstanding.”

Stallman, who in 2006 wrote, “I am skeptical of the claim that voluntarily [sic] pedophilia harms children,” also wrote in September 2019 that he had changed his mind about sex between adults and children.

“Many years ago I posted that I could not see anything wrong about sex between an adult and a child, if the child accepted it,” Stallman wrote. “Through personal conversations in recent years, I’ve learned to understand how sex with a child can harm per [sic] psychologically. This changed my mind about the matter: I think adults should not do that. I am grateful for the conversations that enabled me to understand why.”

Two days later, Stallman wrote, “I am resigning effective immediately from my position in CSAIL at MIT. I am doing this due to pressure on MIT and me over a series of misunderstandings and mischaracterizations.” Stallman’s resignation from the FSF was announced the same day. He continued leading the GNU operating system project, which is supported by the FSF, despite calls to resign from that position as well.