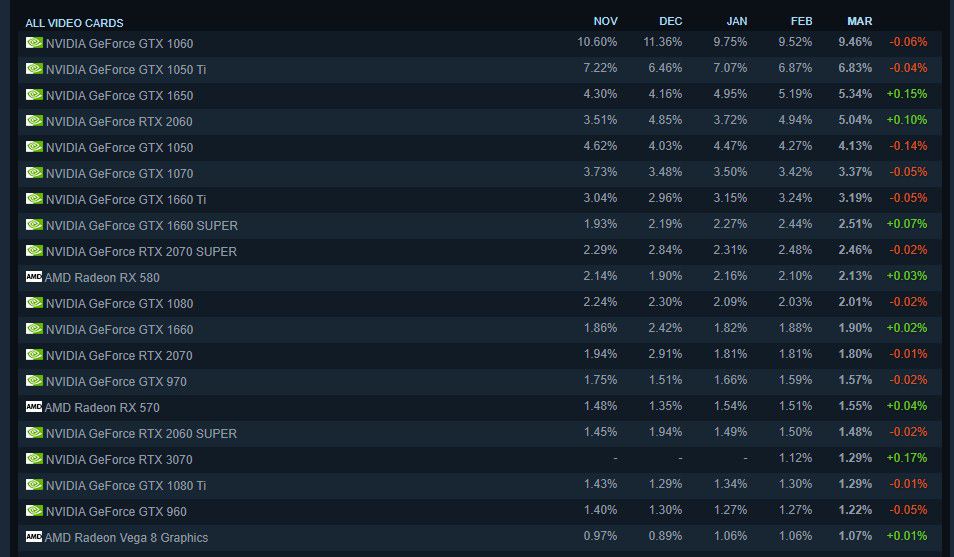 Now that the street price of an Nvidia RTX 3070 is over $1,200, it’s temping to think scalpers, bots and cryptocurrency miners got them all — but the latest Steam Hardware Survey suggests at least some of them are making their way into gaming PCs, too. As TechSpot reports, the 3070 in particular appears to have become Steam’s fastest growing GPU, and the 17th-most popular graphics accelerator on Steam with a 1.29 percent share overall.

That not bad, especially considering AMD’s rival RX 6000 series doesn’t have a single spot on the entire 95-GPU leaderboard. Apparently, more gamers are using the 2011 Nvidia GeForce GTX 550 Ti (0.16 percent) than any of AMD’s latest cards.

More than a quarter of Steam PC gamers are now using AMD CPUs instead of Intel, though, so that’s probably some consolation.

If secondhand sales numbers are anything to go by, I would expect the newer RTX 3060 to contribute to Nvidia’s tally next month.