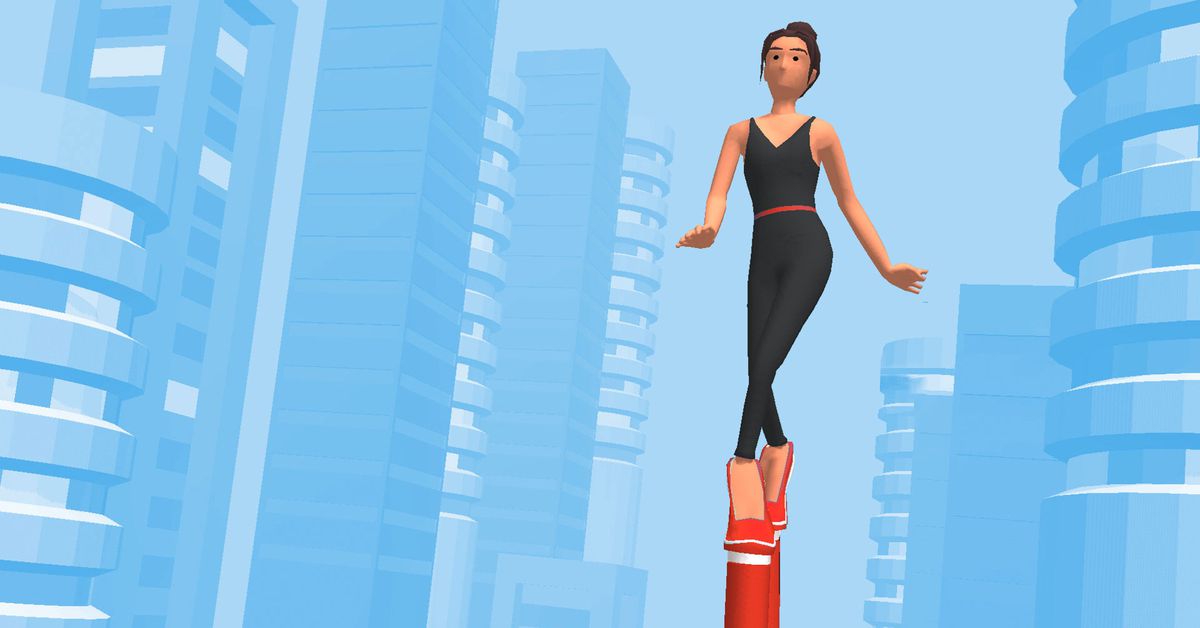 One night in January, I was scrolling through TikTok with the bottomless human need for content when a video urged my glassy eyes awake. It was a TikTok for hypercasual phone game High Heels! made from an original video by TikTok user Isaiah Baca. He proclaimed that he had “found a game for baddies.”

A “baddie,” if you’re not familiar with the term, is essentially a hot, independent girl. According to one of the oldest Urban Dictionary entries for “baddie,” from 2006, one of the ways that you could use “baddie” in a sentence is to say, “Wow, that girl is a baddie.” So, checks out.

Baddies aren’t your typical phone game demographic. But watching the addictive, repetitive premise of High Heels! unfold, you kind of see what Baca means. The game, by Turkish developer Rollic Games, is as simple as its genre necessitates. You play as a continuously sashaying woman, stacking high heels to get over obstacles that progressively eliminate your heels. Occasionally, you slide down a platform while doing the splits and clapping.

Although I mostly forgot about High Heels! until I started getting more TikToks for different-but-very-similar hypercasual games, it went viral. Most of the thousands of comments lauded the developer’s use of a genuine TikTok as an ad, laughed about the game’s use of the splits (it’s pretty good), and asked (in all caps) what the name of the game was. Just like with Brand Twitter’s strange but often successful imitation of relatability, the perceived authenticity of High Heels! brought it relevance. According to a mid-April report by Pocket Gamer, High Heels! was one of the biggest mobile game debuts for the first quarter of 2021.

Some recent “baddie game” titles include: Squat Master, where sitting on various conveyor belt items will either inflate or deflate your character’s butt; You Go Girl, which involves posing a character as she twists down an infinite pole; and Nail Woman, which is the nail version of High Heels! with the added bonus of, if you pass a shirtless boy character, Nail Woman’s nails cut him in half.

A lot of the conversation surrounding these TikToks are the same. Users declare the games to be “baddie games” or what video games made by Gen Z would be like. They are also heavily associated with the queer community, not only because queer users tend to play them but also for other signals, like LGBT hashtags and strategic music choices, namely sped-up versions of Nicki Minaj’s “Megatron” and Lil Nas X’s “Call Me By Your Name.”

The aesthetics of the games themselves also gesture at queerness and online culture more broadly. A lot of “baddie games” are centered on exaggerated gender performance, much like drag or ballroom culture. Other games flirt with the idea of sex work or embrace the “bimbo,” two things notably redefined by the internet’s obsession with sugar babies, OnlyFans, and previously maligned 2000’s hot girls like Paris Hilton and Britney Spears. Even the bestowed moniker “baddie game” encompasses these things with its implied hyperfemininity and sexual liberation.

In a February article for Input, writer Matt Wille singled out High Heels! as a game that rewards players for queerness, writing, “Whether or not its creators intended it, High Heels! deserves credit for being a space around which the queer community can celebrate being femme.” I’m not entirely sure of that. The only things that are “queer” about these games are the aesthetics and vernacular co-opted from their most loyal players.

With this in mind, I talked to queer comedian Mano Agapion about baddie games after seeing an old tweet of his about it. “Everyone play the iPhone game High Heels!,” he wrote on February 6th. “It’s queer culture.” Wondering if he still played the game, I DMed him. “I burned through it in two weeks. I don’t play anymore, but I did try the big butt one,” he said over DM. “You clap as you’re split upon broom sticks connecting two skyscrapers. And that’s drag.”

I asked if anything about the game’s purported queerness bothers him. “It makes sense that it’s queer bait,” he said. “But sometimes you have to turn your brain off with a dumb thing. And I like queer things being celebrated in pop culture.” Ryan Davis, a Twitter user who tweeted that he was “willing to trade all of the live feed videos on my TikTok [For You Page] in exchange for more High Heels! game ads,” DMed me something similar. “Honestly, I just thought the ad itself was pretty funny. I think the aesthetic and branding plus the Nicki song paired well and made the game seem intriguing.”

So maybe I am overthinking this whole “baddie game” thing. Maybe I should let games like Rollic’s Bounce Big, which asks you in the description to “collect delish jigglers!” as you grow your character’s ass, jiggle in peace.

But Rollic has refused to acknowledge its explicit tie to the queer community, the one it created by using a queer person’s TikTok as free, viral advertisement. The studio, and other developers, strengthen the tie by flooding the app store with new baddie-baiting games that all seem to be in never-ending imitation of each other.

Searching any variation of “queen” or “heels’’ will yield you a healthy handful of hypercasual game results, most by Turkish developers like Rollic. Some notable titles that speak to just how strong the assembly line vibes on this whole “baddie game” thing is: Catwalk Queen by Baris Yilmaz, which involves filling an ever-growing purse with mounds of money; Roll Queen from Hakan Ozer, which uses the slogan “the simps go round and round” and has your character stepping on men to progress levels; and Baddies Up by Wixot Studios, which requires you to both step on men and collect wads of cash.

Turkey is a bit of a powerhouse when it comes to mobile gaming and has been a part of a few high-profile sales, including San Francisco-based Zynga’s acquisition of Rollic for $180 million in cash in 2020. Homosexuality is legal in Turkey but institutionally suppressed. The “baddie games” tie to Turkey makes their queer bent a bit more exciting, flickering with the possibility that they’re giving Turkish queer developers and artists a space to create.

But when pressed on the topic in the past, Rollic has been deliberately cagey. In an April interview with video game news network VENN, when its games’ popularity with the LGBT community was mentioned, Rollic’s director of art and design Inci Alper said, “We didn’t make it specifically for one group of people, but wanted to be as inclusive as possible; we wanted to include everyone, kings and queens and everything in between. We make games that are played worldwide, and any age group can pick up.” In an interview with Input, Rollic evaded revealing whether the studio employed any queer developers and did not respond to my request for comment. In other words, Rollic won’t publicly stand with, employ, or speak positively about the queer community, but it will certainly profit off of their support.

TikTokkers have continued to highlight new “baddie games” because they tend to get a lot of likes. They’re also inundating the games with 5-star, facetious-yet-undeniably-glowing reviews. “This game is the reason I am still alive today,” one review from February 9th reads. “If you don’t download it you will go through a life of depression and misery and you will never learn to be a baddie.”

When I asked Agapion what he thought of Gen Z’s understanding of being gay, he wrote, “It’s a weird moment for queerness.” He continued: “As someone who’s visibly POC and queer, my queerness affects my life, my health, my well being. The community (like trans queens at Stonewall) didn’t choose advocacy because it was cute. They couldn’t live if they didn’t advocate. That is lost on young people.”

For the makers of “baddie games,” leaning into a younger generation’s disconnect with history is the key to their success as imitating internet-speak, using memes, and catering to queer social media users become increasingly popular marketing strategies. But even if they want us to play, we don’t have to let them win.