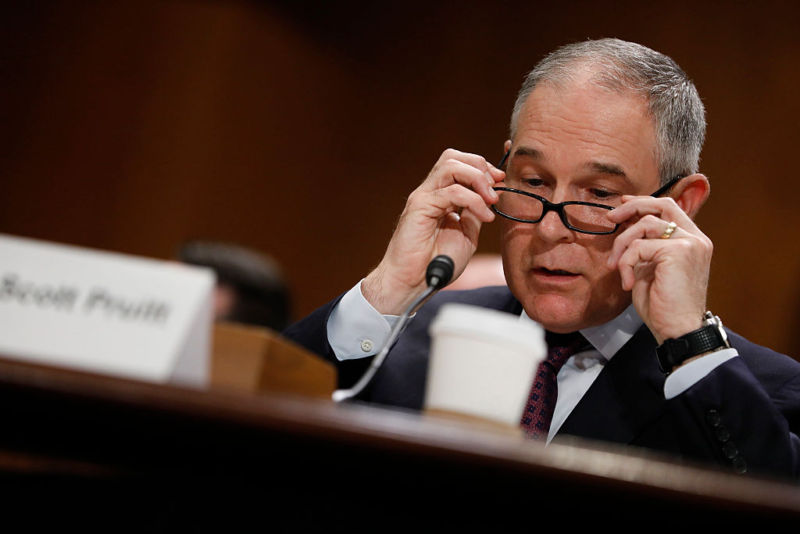 When drafting fuel economy and greenhouse gas pollution rules for cars and light trucks, former EPA Administrator Scott Pruitt decided to cede various EPA duties to the National Highway Transportation Safety Administration in what is typically a collaborative process, the independent inspector general said in a report released yesterday. Though Pruitt signed the final report for the EPA, he allowed NHTSA staff to write a significant portion of the rules and to complete all modeling and analysis for both agencies.

The NHTSA’s modeling efforts did not use the EPA’s established tools that had been created to evaluate greenhouse gas emissions standards. Instead, the NHTSA hacked its own Corporate Average Fuel Economy models and sent EPA experts the results late in the process. “Technical personnel were unable to fully collaborate on rule development,” the report said.

The EPA and the NHTSA have collaborated on fuel economy and emissions standards since 2010 in an effort to streamline and harmonize regulations for automakers. In rules written during the Obama administration, the EPA and NHTSA called for 5 percent annual increases in fuel economy. After Trump was elected, though, automakers wrote to his transition team to request that the annual increases be frozen. The Trump administration obliged, reviewing the rule and issuing a new one calling for 1.5 percent increases in fuel economy. The reason for the reduction, they said, was that it would help keep auto prices lower, allowing consumers to buy newer, safer vehicles. Not everyone was convinced by that logic.

That the final rule included such a rationale is not surprising in light of the inspector general’s report. When making fuel economy rules, the Energy Policy and Conservation Act directs the NHTSA to consider four different variables—“technological feasibility, economic practicability, the effect of other government standards on fuel economy, and the need of the nation to conserve energy,” the report points out. None of those includes pollution or its effects.

The EPA, on the other hand, is the only agency that the Clean Air Act allows to regulate greenhouse gas emissions from new vehicles.

Career EPA staff, who are not political appointees, reportedly felt shut out from the process, a drastic departure from the previous four times when they worked with the NHTSA to jointly issue pollution and fuel economy rules.

The inspector general’s report also noted that the EPA skipped major milestones in its rule-making process. The agency, according to the report, “did not document who decided to skip these milestones and why.”

New EPA Administrator Michael Regan said he would be reviewing the Trump-era fuel economy standards and will release a revised rule by the end of July. The new rules could effectively phase out fossil fuel vehicles.

This latest report isn’t the only to find fault with the way the Trump administration went about writing or rewriting environmental regulations. EPA political appointees also ordered career staff to scale back efforts to monitor ethylene oxide pollution in the Chicago area. The flammable gas is used to sterilize medical equipment, but it’s also a proven carcinogen.

Chicago EPA staff, barred from an official effort to document ethylene oxide pollution, installed air pollution-monitoring equipment outside an agency warehouse that abutted a large sterilization plant owned by Sterigenics, a major emitter of ethylene oxide. The scientists discovered that pollution from the plant was at such high levels that it significantly increased the cancer risk in the surrounding neighborhood by orders of magnitude, according to a report by the Chicago Tribune. The company couldn’t get the plant’s pollution under control and ultimately closed the site after significant opposition from the community.

The EPA is also undertaking a broader review of decisions where the agency’s scientific integrity may have been compromised. Regan asked employees to bring “items of concern” to agency-scientific integrity officials or the inspector general, who would investigate accordingly.

Trump administration officials at the Centers for Disease Control and Prevention are also under fire for their meddling in scientific affairs. Earlier this month, documents released to the public showed political appointees pushing for changes in how the CDC framed reports about COVID-19 and the agency’s Morbidity and Mortality Weekly Reports. The alterations helped frame the CDC’s reporting on the pandemic in terms that hewed more closely to then-President Trump’s rosy outlook.